Georgia has some of the finest food in the world and yet the cuisine is not well known outside the Caucasus region. Influences from neighbouring Turks, Russians and Persians combined with the large Jewish population (one of the oldest in the world), results in an interesting range of dishes which make use of their outstanding organic produce.
Georgian food is now becoming more available in London, and although it lacks some of the endearing rusticity of that produced and served in the ex-Soviet state, it’s still fantastic: at once curiously familiar and completely new.
The Georgian table is a fully laden one. The people are very hospitable and love to treat guests to feasts, or ‘supra’, which often last for hours. Much natural wine will be consumed (Georgia is one of the countries where wine was first produced) and many speeches and toasts will be made. If you’re lucky, there will also be some traditional polyphonic singing.
A meal typically consists of many cold and hot starters, plates of herbs and cheese, clay pot cooked dishes and stews, plus their famous breads and pickles. What follows is a list of our must-order dishes at any Georgian restaurant and some of best places to try them.

Khachapuri
Let us start with one of the greatest Georgian inventions: khachapuri, a kind of cheesy bread (khacha means ‘fresh cheese’ and puri, ‘bread’). There are many regional variations in style and shape, some with eggs poaching gently on top as they make their way to the table. They’re often finished with pats of slowly melting butter. Hello. We do not have the salty sulguni cheese here in London, so restaurants tend to mix cheese for a similar result.
The circular, Tbilisi style (Tbilisi being the capital of Georgia) is soft, bubbled and blistered on top. Other variations are made with a flaky, almost filo-type dough. When visiting Georgia we loved these so much we snuck a stack of six onto the plane and ate every last crumb in-flight. That’s a lot of cheese and dough, guys. No regrets.

Meals in Georgia begin with a tableful of cold starters, pkhali being one of them. Chopped, cooked vegetables such as cabbage, spinach or beetroot are mixed with walnuts and herbs, then shaped into balls. They’re usually presented topped with pomegranate seeds and are best when spread onto long, slipper shaped loaves, fresh from the tandoor. Our favourite is the spinach pkhali, fragrant with tarragon (a very popular herb in Georgia).

Another must-try cold starter dish or snack is badrijani, made from strips of aubergine, which have been fried, cooled then stuffed with a rich paste of walnuts Plates of herbs come as standard at a Georgian meal, and it’s helpful to think of them more like salad leaves. They’re piled onto plates in giant fronds, purple basil with its thick, aniseed scent, feathery tarragon, dill and coriander. The Georgians consume herbs as the Iranians do, in vast quantities and as much for health reasons as flavour.

This rich bean stew is served in little clay pots. Spicing with coriander and thickening with walnuts is common but, as with other Georgian dishes, there are many variations, particularly by region. It’s not uncommon to find the savoury flavour enhanced with a small amount of meat. Lobiani is a kind of bean filled dough — also well worth ordering.

One of the most popular dishes in Georgia, chakapuli is a lamb stew flavoured with tarragon and sour cherry plums, the latter an important flavouring throughout the cuisine. The plums are harvested when still unripe and used in a multitude of ways. One of their main uses is in tkemali (below). 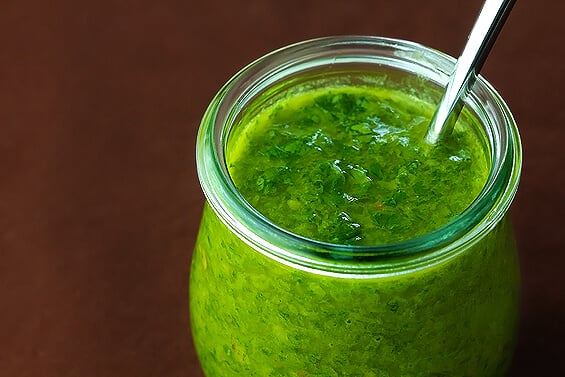 This sauce made from small, sour plums is an important seasoning and table condiment in Georgian cuisine. It comes in red and green varieties, and is fragrant with dill, coriander and in Georgia, pennyroyal, a herb with a flavour similar to spearmint. It’s so popular that it is mass produced commercially in Georgia, but home made versions are available at food markets, sold in old plastic Or… Georgian kebabs. Variations on the kebab can be found all across the world of course, and one of our favourite Georgian preparations is cubed pork, marinated, skewered and grilled over hot coals. The tender meat is then served with sliced red onions and some tkemali, or sour plum sauce. 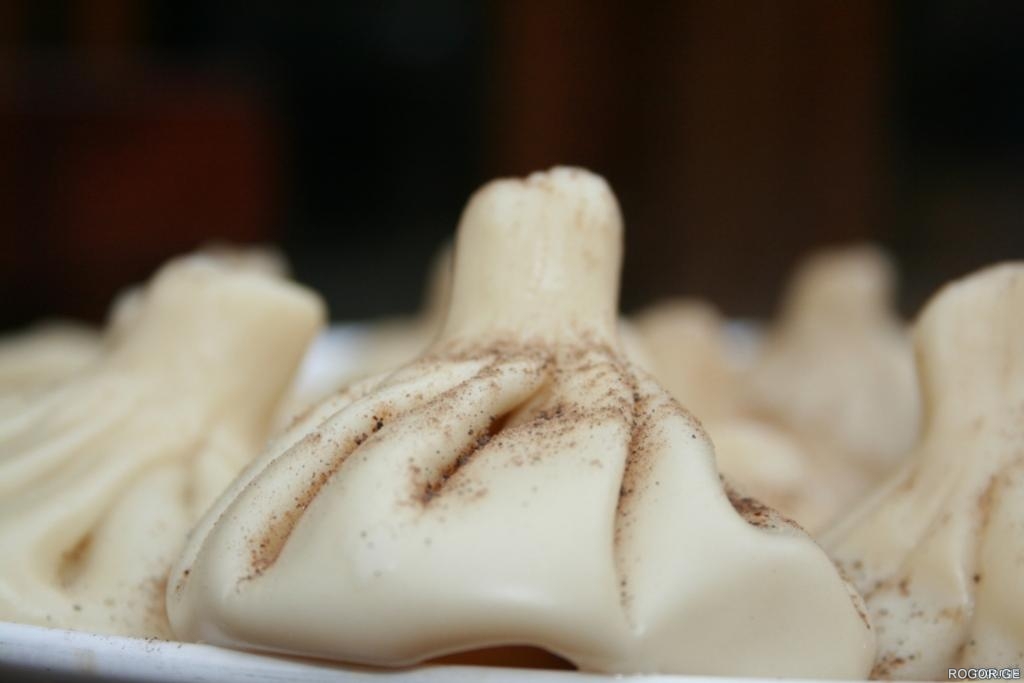 These dumplings are another classic dish (yes, there are many). Thick wrappers are filled with minced lamb or beef and pork, and spiced heavily with black pepper. Originating in the mountainous regions of the country, they’re substantial but all the better for it. A little like the Chinese xiao long bao, or soup dumplings, they contain broth, and so the trick to eating them is to nibble off the tip and suck out the broth before consuming the rest of the dumpling. They should always be eaten with hands, never cutlery. 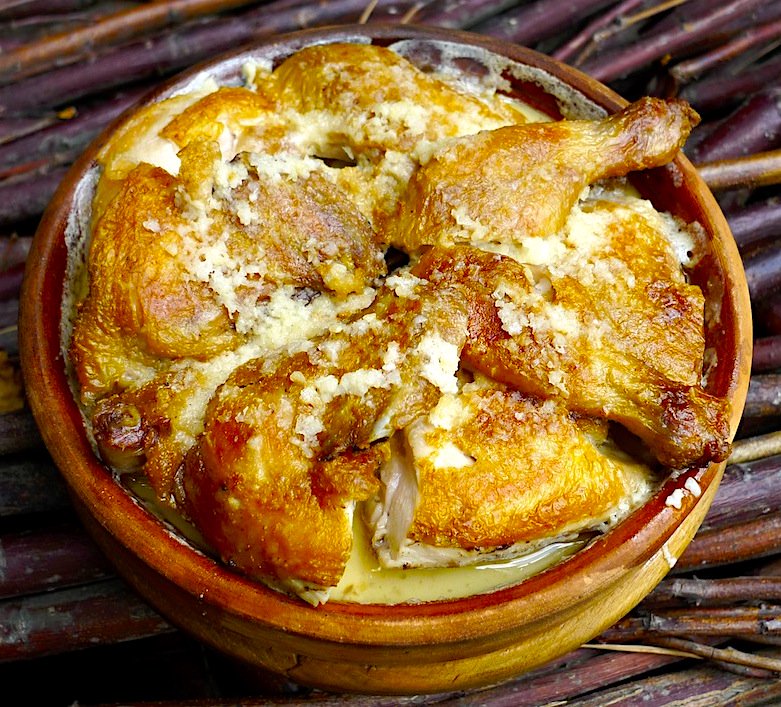 This is a rather addictive dish of chicken cooked in milk and garlic, from the Racha region of Georgia. The poaching leaves the meat juicy and soft, while the garlic should be strong. The meat is served along with the garlic-y juice which is to be dipped into with plenty of bread. 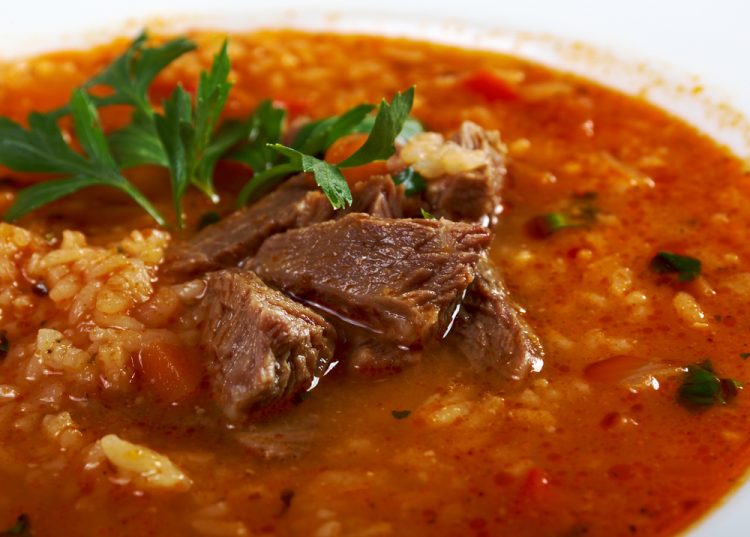 A comforting stew of chicken or beef, this is a warming dish flavoured strongly with garlic and khmeli suneli (a Georgian five spice blend). The sauce is thickened with those beautiful fresh walnuts again and also torn pieces of tklapi, a sort of thin fruit leather which is often used as a souring agent in cooking. Meat is tender, sauce is rich and the plate should be wiped clean.

This is surely one of the best things to come out of Georgia — a fiery red condiment made with hot peppers, garlic, herbs and spices, thickened with walnuts (they really do love walnuts). The flavour and consistency of ajika varies widely, as does the heat level. It’s always addictive, and we think it’s one of the world’s greatest sauces. Make sure to order some with your meal.

These are two desserts/snacks made using grape juice, the first a sort of grape juice blancmange and the second a long, thin stick of walnuts strung together, then dipped repeatedly in juice to form a coating. It is then served in slices. Both could be considered an acquired taste with their sweet/sour musty flavour, but are interesting and should be tried at least once!

Rkatsiteli and Saperavi are the two main grape varieties to try. The first often makes an orange wine which can be a little shocking for the uninitiated with its farmy, cider-like flavours. Fermented in a qvevri, a clay vessel sunken into the ground, it is left to do its thing naturally, and consequently produces a shocking amber liquid with flavours of apricot.
Saperavi is a red variety, almost deep purple/black in colour with bold, earthy black currant flavours. It’s easy to drink, bold but with enough elegance to keep things interesting — a good introduction to Georgian wine.